So one fine Sunday, I was able to sort out the jalebis of my life and parcelled my novel to a few publication houses. I was Gung-ho initially but started getting cold feet the moment I inserted fresh crisp A4 sheets in the printer. I turned into Gollum and my twin personalities started fighting.

“It’s not good enough! Give it another reading!”

The good Gollum won and the button was finally hit, printouts taken and manuscripts couriered and e-mailed. It’s all done and the trepidation is nowhere near abatement. I will give it another 5-6 months and if I do not hear anything, I will drink my tears and move to the next lot of publishers.

Now as you all are the elite readers of this blog, it is my responsibility and privilege to give you a sneak peek into the creation of this story and how I went about it. This is how it happened –

So, that is how, ladies and gentlemen False Ceilings came into existence. I have sent it to a few publishers and the wait time is anywhere between 5-6 months. I will update you as soon as I hear something. And, so I leave you with a could-be-blurb of the story.

It was an enormous owl sitting on Shakuntala’s bedding that brought the bad news and changed her life. Years later, when the nerve ruptured in her brain, it was too late to share her secret. Her open eyes oscillated for seven days.

It wasn’t humans but dancing peacocks and steam engines guarding the horizon that elicited an emotion from Aaryan. He turned into a misanthrope when he was five.

Manohar was almost there when he gave up and crumpled like a detonated building. When he died, his grandson saw him flying because his legs were so thin.

Vinod liked female wrestling and lions hunting deer on Discovery. He had hunted for quails in the jungles of East Delhi and jumped into trams in Chandni Chowk. The adventures had to go on.

Meena sprinted like a horse and won prizes in racing competitions but no one wanted a bride who runs for a living. Marriage was fed into her as an escape to utopia that eventually choked her every dream. In the end, her coffin broke her into two.

Lipi could never make the almirah speak. The almirah had seen it all but it stood in a corner, hiding the secret in its false ceiling. And even after 127 years, the wooden radio still worked. She died listening to it. 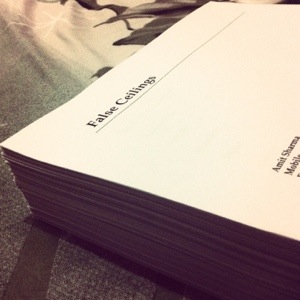