It is rare that there is a pin-drop silence in the theater while a movie is playing. Usually there are people who are talking, giggling, making fun of one thing or another, people getting restless and banging your seat from the back and mobile phones ringing and being answered. It is rare that a movie commands your apt attention and that is what I witnessed in the theater as this mesmerizing last installment of the Dark Night Series unfolded. No one moved for 165 minutes.

The biggest challenge for Christopher Nolan was to at least match the benchmark of The Dark Knight. The absolute terror which Joker created in that movie will remain unparalleled in the world of cinema. This movie needed its own moments to make people forget Joker. I knew that if I would have missed Joker, this movie would not have worked for me. And I didn’t.

Set eight years after Batman disappears after taking the blame of Harvey Dent‘s murder, Gotham is peaceful and free of organised crime. Enters Bane and things go for a toss. I would not reveal the whole plot here as the movie connects to the Batman Begins at a lot of places, there are pieces of the jigsaw which fall into place, so it would be a good idea to watch it before going for this one. 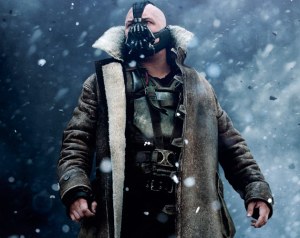 There are a lot of sequences in the movie which gives you goosebumps, like the opening sequence in which an airplane is pulled up by a bigger aircraft, the first appearance of the Bat hovercraft when Batman is cornered into a dark alley, the moment when Bane hits the button and the whole American football ground caves in and cat burglar Selina Kyle driving the Bat Pod. Amidst all this mayhem, there are moments which gives depth to the characters, like the one between Bruce and his butler Alfred where Alfred tells him that he does not want to bury him and the one between Selina and Bruce where she tells him to save himself as he has given enough to the city.

Nolan uses three of his Inception cast members here – Joseph Gordon-Levitt as a Blake who is a smart police officer who inferred Bruce’s actual identity and one of the very few officers left on the ground (you will know what I mean when you see the movie), Marion Cotillard as Miranda who is one of the board members of the Wayne Enterprise and plays a key role and of course Tom Hardy as Bane. Anne Hathaway as Selina is an interesting grey character but finally joins the fight against Bane and God! does she look sexy riding that Bat Pod. There was quite a lot of whistling in the theater when she knocks down the enemy vehicles with it. Christian Bale is the perfect Batman. He has that sadness on his face.

The movie is fast paced and constantly keeps you engaged. There are times when the scenes rush and you feel that the movie is trying to squeeze in a lot of things but you can ignore such times. A lot of credit goes to the background score too. It pumps up the events, creating an aura of terror. All the recent Nolan movies like Inception and the Dark Knight had exceptional background scores too. These movies can act as a case study as to how a good background score can elevate a movie to a new level.

I found the graphics a bit patchy in a few places like a few shots where the missiles are following the Bat Hovercraft. We have seen better. Also, Miranda’s death scene was comical. She died like a Bollywood hero – closing her eyes and jerking her head.

As the movie ended, people clapped and whistled and let out the breath they were holding. Take a bow Mr. Nolan for giving us this epic finale of the masterpiece trilogy.