And thus arrived the mother of all Superhero movies. And what an arrival!!! Its dark, its gloomy, its dangerous and it makes your hair stand. It reinvents the villain in Cinema and pours an avalanche of well crafted sequences and performances your way. This was the most awaited movie of the year and it was worth all that wait.

Christopher Nolan directs this sequel of Batman Begins where Batman(Christian Bale) is pitched against the most malicious villains of all times- The Joker (played by Heath Ledger). The Villain who does not care about money but just want to see the world in chaos. There is no way you can scare him because he has nothing to loose. Then there is Harvey Dent (Aaron Eckhart) who is the district attorney and has a strained relation with Batman. He is Gotham city’s only hope as a hero with a face and Batman is banking on him so that he could live a normal life with his childhood sweetheart Rachel Dawes who is oscillating between the two men. In comes the Joker and everything turns topsy turvy.

The movie belongs to Heath Ledger. Never have a villain been so terrifying and so much filled with malevolence. Its been a long time since we have come across such a fine piece of villainy(read acting) and I can strongly smell an Oscar. Its rare when an actor takes over a movie with his sheer presence even though he is playing a villain. This was Heath Ledger’s last movie as he passed away in January 2008. Joker will always be remembered by this performance and whoever takes over the role in the next movie in the series will be having some pretty big shoes to fill in. Christian Bale is also good as the man torn between his duty and love(as all superheroes are) while 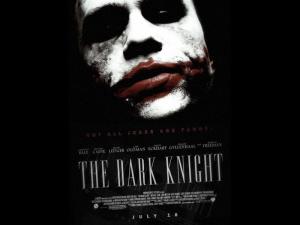 Harvey has some very realistic graphics done on his face in the second half.

The movie boasts of some great action sequences although I didn’t like the one towards the end as it was too haphazard and hazy. In this movie Batman can be seen flying for the first time when he goes to HongKong to abduct Lau for the Gotham City police. That was one hell of an action sequence. The sequence in which Joker attacks the police vans carrying Harvey is also well executed and that is where the Batpod appears for the first time. Pretty neat vehicle. 🙂 The Joker is in police custody near the interval and you think that its over but its just the lull before the storm. And yes, Harvey Two-Face also makes an appearance.

Do watch this movie as it is one of the best Superhero movie of recent times. Dark, full of turmoil and with fabulous performances. Watch it for Joker, the perfect Anti-Hero. Its nothing less than sheer delight.