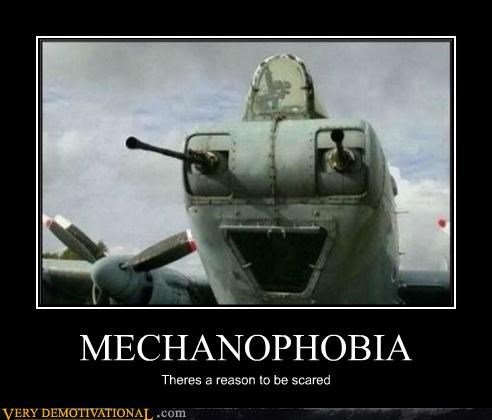 No, I am not going to rant about the impending doom of humanity because Terminators are here. Neither am I going to convince you that we live in the Matrix. And no, my laptop did not transform into a Transformer and attack me.

What I am going to tell you is that I am suffering from mechanophobia. I fear machines. Not the imaginary machines whose fear Hollywood have instilled in millions of us over the years, but the real machines that surround us all day. It is strange how that fear is instilled by small minor incidents that stay with us and grow their inky black tentacles in our brain as we grow up.

Take for example, the ceiling fan. A very harmless machine, you might say. Not for me. I remember my grandfather telling me years ago how a man was decapitated by a ceiling fan that suddenly decided to part from the ceiling. I was a kid and the story stayed with me and every time someone would switch on the fan, I would look at it with fear as if this was going to be the last swirl of air to hit my face. Till date, winters is my favorite time of the year. A few days after my grandfather told me this story, a ceiling fan fell over my uncle’s massive and turbulent tummy as he was sleeping. It is another story that the fan just bounced off him because of the fats he had accumulated over the years. He lived to tell the tale.

A few days back, a guy died in our locality because he had left his laptop switched on to download movies in the night as he went to sleep. The battery developed some problem and emitted some sort of a poisonous gas. The poor guy did not even knew what hit him. Now, I have this habit too and ever since I have heard this story, I have developed a fear of leaving my laptop switched on at nights. I do not want to wake up in heaven without even knowing what happened. I have started sniffing my laptop and I look very suspiciously at it.

The machines that carry us places terrify me even more. Whenever I sit in cars or buses, I keep wondering if this is my last day on Mother Earth. What if the car explodes in flames or one of the tyres of the bus burst while the driver is over-speeding? What happens if the Metro fall off one of its pillars? What if the train I am travelling in collides with another one and I am stuck with entangled metal and dead bodies with an iron rod jutting out of my shoulder? I can’t sleep at nights in a train. I keep imagining that all of us are going to DIE! Whoever came up with the bloody idea of running this crazily heavy machine on two thin metal tracks was a fool.

And ever since that Malaysian flight has vanished, my fear of flying has multiplied. Think about it. There is this huge machine made up of a million part flying thousands of feet above the ground and you are encased inside it. Thousands of things can go wrong. One small part stops working and that it it. You will end up screaming to glory, falling to Earth in a huge ball of fire. Or worse, end up as shark food.

And don’t get me started on lifts. Every time I hear that slight creaking of the lift as it fills, I keep imagining that the metal wires that keep it dangling are going to snap and we will all experience zero gravity before splattering to our death. I hate confined spaces that does not give you any chance to save yourself.

I fear the drilling machine too. Every time dad brings it out to drill a hole in the wall, I get all panicky when he switches it on. I keep imagining that the drill bit will fly out of the machine any time and head straight for my head. You can’t imagine how many deaths I die before that machine goes back in its box. I keep imagining the drill bit embedded halfway in my forehead.

And I can go on and on. What if my mobile phone explodes? What if the room heater catches fire while I am sleeping? What if the CFL falls on my head (It fell off once in my room and shattered to pieces. Thankfully, no one was standing beneath it)? Sometimes I feel like a walking Final Destination. All Parts.

Of course, I do not let anyone around me know of my fears. I behave as if I don’t care and am perfectly normal like every one else. They have no idea about the storm raging inside me. But then what do I know about the kind of fears other people are living with? On a basic level all of us are the same. Phobia is a part of our psyche. There was a time when I thought that I was going mad, fearing things that are a part of our every day life. I thought I needed some help. I realized it is not the fear of machines per se. All the phobias stem from our fear of death, of losing something. If you ask someone what they fear, you will always get a couple of things – Dads, Bats, Lizards, Darkness, Men, Women, Loneliness, Sea, Company, Self etc etc. So, I think I am all right. I am not falling to pieces. Not yet.

Now if you would excuse me, I need to go and kill a cockroach. I am the only one in the house who is not scared of them.

27 comments on “Mechanophobia minus Matrix”