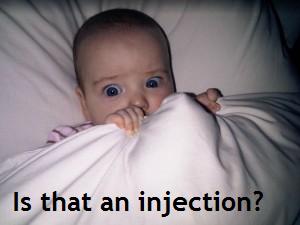 Anika turns two months old tomorrow. She is taller by a few centimeters and weighs almost double of what she weighed at the time of her birth. She now has layers and layers of baby fat on her arms and legs and has a double chin that can shame Adnan Sami (older one). She also has started smiling although she does that more while staring at the walls than the family which scares the shit out of us. We believe that there is a ghost in the house.

Sharma Clan is famous for its sense of timing. We have a 100% track record of understanding the importance of a perfect sense of disruption and I am proud to announce that Anika has picked the trait in just two months of her existence. So, the moment I put her to sleep and tiptoe towards my laptop, she suddenly opens her eyes and start wailing. The feat is repeated when we are eating food or trying to take a nap or basically doing anything that does not involve her. She pretends to be asleep and the moment you happily turn your face emancipating a sigh of relief, she opens her eyes and give an evil grin.

I am so proud of her.

We had Anika’s naming ceremony a few days back. It was just a formality as she already has a birth certificate with her name on it. She slept throughout the ceremony, flailing her arms in alarm as if the world was about to end when the priest dropped a utensil on the floor. When the fires were lit in the hawan kund, we deported her inside. The priest had too much time on his hands as he had no other appointments and he took his own sweet time to finish off the ceremony.

Now I really like the fire part of such rituals. I was adding ghee to the fires, just like those vamps in our daily soaps. It is an art. You have to drop the ghee at precise locations so that the wood catches fire properly and you don’t end up suffocating to death. It’s basic survival skills. So the whole Sharma clan was more interested in strategically burning the wood rather than what the priest had to say. He was anyways into too much of Sanskrit. In the end, I had to lower a mini coconut in the fire and I loved to see it burn with the rest of the wood that the family had successfully reduced to ashes.

Then the eunuchs arrived. Their leader was a towering personality (imagine The Great Khali in a saree) who made us shudder by her dance. We had to part with 7500 Rs because the gang repeatedly threatened us that they will be taking off their clothes in front of us. I was amused and actually wanted to see if they are capable of doing that but I got glares from my family and we finally gave in to the blackmail. 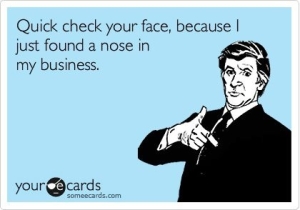 I can’t describe how much I abhor all those nosy ladies from Mom’s kitty who came for the ceremony. One of them has a granddaughter of her own who is a month younger to Anika. There is some problem with her eyes as they water very frequently. The doctors say that they might have to do a minor surgery. Now this lady finds solace in scrutinizing all the babies in the colony to find watery or uneven eyes. The first comment that fell off her mouth after seeing Anika was – Don’t you think one of her eyes is smaller than the other?

“Really? Just like your boobs?” I wanted to ask. Of course I held my tongue back. Then she did what we were avoiding to do throughout the ceremony. She smeared Anika’s forehead with the red tilak and then plonked a few rice grains on top of it as if she was a ceremonial goat tied in a temple.

Another lady had a huge issue with what Anika was wearing. She behaved as if we have draped the baby in woolens in peak summers. Then she had a problem with her name too.

“Why Anika? It is a very old fashioned name,” she remarked.

Another one had a problem with Anika’s upper lip. Sigh! Dear Diary, I must tell you that my middle finger was twitching to be raised throughout their stay in my house. I am contemplating putting a sign board outside the house specifying that dogs and nosy aunties are not allowed inside.

Anika got two injections in her thigh as well. The moment the needle went in, there was an expression of utter shock on her face and then the scream came 5 seconds later shattering all the glass windows of the hospital. I think she was quite brave, given the fact that her mother still holds my hand while facing an injection and makes a face as if she has swallowed a frog.

Time is flying by. I can feel it. A few days back Geet and I were discussing about how Anika will grow up and leave us one day to find her world. Silly, I know. It all started when I took a policy in Anika’s name that will mature in 21 years. Now I have two policies to take care of in addition to a home loan. The dent in my pocket is so enormous that I can fall through it and out of my pants.

I need to stop. She is awake and quivering her lips like Sharmila Tagore.