I was sitting on a ladies seat in a DTC bus. Now before you take out your knives, let me clarify that I was very tired and there wasn’t a single lady around who was glaring at me. A girl boarded the bus a few minutes later and courteous and chivalrous as I was, I got up to offer her the seat. I guessed that like me, she too was studying in Delhi University as both of us were wearing that unmistakable, funky college kinda stuff. She declined to take the seat and asked me to keep sitting. There was a near contempt in her voice, as if I had insulted her in some way. Confused and bewildered, I sat at the ladies seat while she towered over me for a while and then got down at Mall Road. Finally, my confusion gave way to respect.

This happened almost 15 years back but the incident plays on a loop in my mind whenever I see demarcations etched out all around me for the opposite sex. In our quest to solve a problem we have created a bigger one. Quick fix I call it but they never solve the real issue, do they?

The era in which we live will leave any man confused. The age old concept of chivalry somehow does not fit in. We cannot talk about equality and special privileges in the same breathe. Ever since that incident, I hesitate to open the door for a lady, I hesitate to pull a chair for her at a restaurant, I hesitate to get up to offer a seat. What if she turns around and glares at me? What if she tells me in very definitive terms that she is capable of taking care of herself? That she does not require any help that is provided considering her gender, considering her weak.

So how much is too much and how less is too less?

What is the point at which I go from being helpful and courteous to being completely irritating and sexist?

Giving an example from my personal life, Geet has been a very independent and headstrong woman all her life but sometimes something gets into her and she behaves all dependent-ish. A few days back, she called me up at the office and asked me to call up her bank for an enquiry.

“Why don’t you call them yourself?” I said.

“Because I don’t feel like doing it. Please can you do this for me?” she said.

“Because you can do this on your own.” 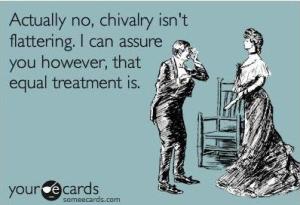 This went on for a while before she understood that I was not going to do it. She finally told me that I was useless and I asked her whether she would like to replace me as I was still under warranty. She called the bank on her own and got the information she wanted. This wasn’t the first incident as I have done similar routines a number of times with Geet and my sister because I don’t want them to depend on me for things they can handle on their own. In the end, once the task is accomplished, I am greeted with a look-we-don’t-need-you snort. And that is exactly what I am looking for.

But then, am I being a bad husband and a bad brother? Am I been unchivalrous to my wife and my sister? It is not as if both of them don’t know the first time around that they can do it on their own but as much as I am able to understand, women sometimes ‘like’ to depend on men. They like it when we do things for them. It is, for reasons unfathomable to me, taken as a sign of love, affection and respect.

Please don’t take me wrong. I like being helpful. But if I hold a door for someone to pass through, I will do that irrespective of that person’s gender.

I have been running this thought again and again in my mind and I have reached a conclusion that I do not like the idea of a woman asking me for help for a task she can perform on her own. I do not like the idea of extending courtesy to a woman because she is a woman. I do not like the idea of providing special privileges to woman to save them from acts of crimes instead of taking measures to prevent those crimes. Can you sweep a really independent woman off her feet by an act of chivalry? Today, when women have been fighting for equal rights and the power to make their own choices, does it really make sense to mistake dependence with a sign of warmth?

I believe chivalry and equality cannot co-exist. Is it time to bury chivalry?

A woman’s perspective – The Awww-topsy

81 comments on “Time to bury chivalry?”