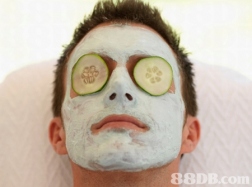 Forrest Gump once said – “Life is like a box of chocolates. You never know what you’re gonna get.”

I beg to differ. There are no horrors in a box of chocolates.

“Life is like a men’s beauty parlour. You never know what unimaginable activity is going to hurt your eyes.”

Now there is drama in this. A box of chocolates is all too sugary, just like rose-tinted glasses.

Here is the secret. I have been to one of those….places. But I swear on my virgin eyebrows that it was the first and the last time, largely because of the eye-popping climax.

*Flashback. Misty eyed. Looking at the distant past with Aamir’s Satyamev Jayate look*

I was about to get married in five days. My mom, in a sudden urge, captured my face with her fingers and looked intensely at it. I felt like a fish, spluttering helplessly in an eagle’s claw.

“Too many whiteheads! You have to go to the parlour. I want you to shine.”

If I have not clarified this before, let me pause and take this opportunity to clear out a few things. I am a guy. Guys do not go to beauty parlours. Period.

My sister joined the chorus basically because she was having fun on my expense. So, I was pushed into having a five day course at a nearby Men’s parlour with a completely forgettable name and an ugly owner who could have used some of the parlour’s services. 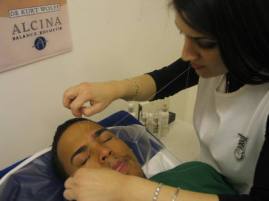 One of the activities

Everyday someone would drop me there and then pick me up in an hour. What I witnessed in those five days was a revelation. I told the guy who was attending me to do whatever he wanted because I was least interested and was about to close my eyes for an hour. He smiled and bombarded my face with one cream after another. Packs and massages rained down, sometimes followed by a lot of steam from what looked like a spare part from an alien spaceship. For five days, there were cold and hot sensations, stinging, steams, sprays and god knows what. I behaved like a patient in coma. The only time my eyes popped out of their sockets was when he applied a green cream which looked like fluorescent poop and felt like needles. I asked him to immediately remove it before he turns me into carrot and himself into a pulpy mass of flesh and broken bones. His fingers revolving on my cheeks was bad enough.

What really got my goat was that the parlour was chock-a-block with boys and men. To be honest, I did peek around to satisfy my urge to understand the need of existence of such a place. There were men discussing face packs and hair colours, waxing their arms and legs, getting their eyebrows done, replacing eyeballs with cucumber and getting a haircut which took hours to finish and hard to spot. Sometimes, I felt like sitting at one of those unmentionable places with red bulbs where people do inexplicable stuff. This was way off my radar of comprehension. This was a really bad dream. My eyes hurt.

Oh! The climax! I almost forgot. On the day of my marriage, when my face was finally revealed in the unnecessarily huge mirror shimmering with the shiny teeth of my attendant at the background, I could hardly make out any difference, except that I was a bit whiter. I guess, that was the whole idea of clogging me with all the creams. I sighed and gave him the remaining amount from my pocket. He asked me to wait and picked up a glittering tube-ish thing from his stuff and started applying it on my lips.

“Err..what is this?”, I asked a bit alarmed and looked all around to make sure no one saw what was happening.

“This will make your lips look red.”

The first thing I did after paying him and coming out of the parlour was to spit and hastily rub my lips with a handkerchief before anyone saw me and start rolling on the ground laughing his head off. Then I inhaled deeply. I felt like Andy Dufresne in The Shawshank Redemption, finally free after digging a long, painful tunnel and swimming in a glittering, red sludgy liquid.

Everyone at my home recognised me. I was not expecting to do a Jassi on them anyways.

*Flashback over. Eyes closed after the painful remembrance*

Well, that was then. I have never felt the need to dwell near any such establishment. The taste of that glitter still haunts me. Forrest Gump was wrong. None of the chocolates would have tasted this bitter.

Life is definitely like a Men’s beauty parlour – sometimes like the pain of seeing a man waxing his arms and sometimes like a cool facemask outlining a moustache.

24 comments on “Life is like a Men’s Beauty Parlour”