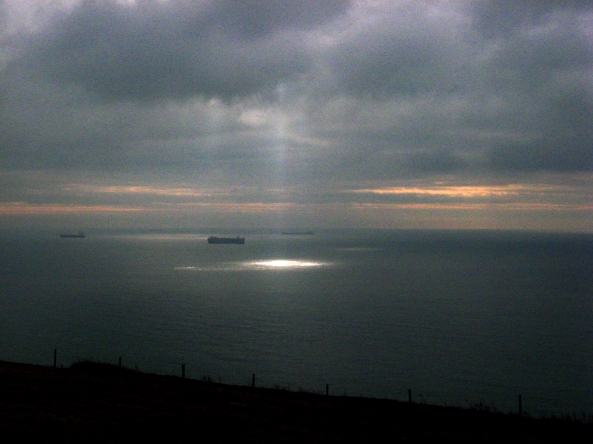 Going to Manchester was a high. I had always wanted to smell the soil of another country, take a lung-full of alien air. It was a whole new world. Different. Exciting. Scary. I learnt to say thank you, even to the bus drivers. I saw roads filled with flower petals in autumn. I saw endless rows of green hills during my train journeys to London. I absorbed the beauty of Britain like a sponge.

It was February when I landed there. The cold numbed my hands and I had to wear gloves to warm them back to feelings. It snowed later that day. It was the first time I had seen white cotton falling from the sky. It was overwhelming. Soon, I with my three flat-mates started to plan for a trip to Isle of Wight. No one went there in winters but then in Britain you pretty much don’t go anywhere in bleak winters.

I took upon me to plan the trip. From creating a map of the small island on the southern tip of England on a piece of paper to hiring a car on an online portal to booking a B&B, I did it all. I was like Alice in wonderland, wide eyed and not too sure whether all this was real. So, I pinched myself and planned.

There were no bridges to the Isle. You have to tuck your car in a ferry. We landed in Fishbourne and drove to our B&B. The island was awfully quite. It was off season. We stayed on the island for three days, visiting the deserted beaches like Shanklin, Ryde, Sandown and Yarmouth. We watched sunrise braving unexceptional cold winds. We went to the Needles, late for the sunset and ran into people coming back. They were beautiful three days but there is one incident which stands out. It changed something in me.

We were at the Yaverland beach looking at the seagulls and the waves lapping the shore. I was staring at the white cliff on my left. I was fascinated by it. I wanted to run and reach its top. I asked my friends if we could walk up there and they were horrified. I told them that I was going up and I will meet them for lunch. Excitingly, I started walking up the Culver cliff. The cliff was completely deserted and after walking for fifteen minutes, I could see no signs of humanity. I was walking very close to the edge of the cliff and there were red danger signs all over asking people to stay away as the edges had a tendency to break free. The horizon was receding as I walked up and ships which were hidden earlier started appearing. The sky was dark greyish cloudy but the wind was less wild up here.

The cliff was less broken at the top and there were wooden fences at the edges. I glanced at a few black sheep roaming around and a small house far off from the cliff edge. But that wasn’t something that caught my eye. I was staring at the vast expanse of ocean and ships looking like small toys, lazying around in the calm water. The only sound which I could hear was that of the wind, dancing around in slow rhythms, broken once by a speeding water scooter which looked like a shooting star from where I stood. A man walked by with his dog. He was going down the cliff.

“Yes. Yes, it is”, I said, still staring at the ocean, inhaling deeply.

And then the clouds parted.

Spotlights started falling on the ships. The ocean was shimmering. It was as if something divine was making an appearance. I knew at that moment that I was looking at something I would never forget my entire life. The sun played hide and seek with the ocean for a long time, hiding behind the black clouds and then appearing somewhere else. It was peaceful. I had never felt such calm. It was like watching a play in a theatre, spotlights falling on artists performing with tranquillity and poise.

The play of nature forced me to reflect. Our life goes through a lot of turmoil as we grow up, wishes to be fulfilled, goals to be achieved. Something similar to the sky with dark clouds hovering over the sea. But then sunshine breaks in once in a while and we are so wound up in the race that we fail to acknowledge it. We fail to absorb the placidity it brings with it.

I called my friends on their mobile and asked them to come up.

“You are missing the sunshine”, I told them. They walked up finally and all of us sat near the edge of the cliff for a while, staring at the ships and spotlights. There was a smile on everyone’s face.

It has been five years since I walked up the Culver Cliff, perhaps for the first and last time, but I still recreate that scene to appease myself whenever I am tense. I close my eyes and imagine myself standing on the cliff, staring at the divine spotlight falling on the ocean. I have always believed that there is so much to see in the world that it is a sin to visit the same place twice. But, then, someday I might walk up that cliff again for old times sake, for the spotlights and the ships.

[[This is my entry for Indiblogger’s Incredible Stories contest]]

7 comments on “Cliffs, Ships and Spotlights”