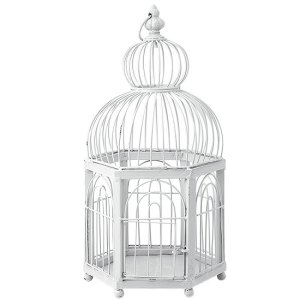 I was sitting on a mat spread lazily on the lush green grass surrounding India Gate when the cage appeared for the first time. It was a sunny winter afternoon and I was in a mood to sketch. My ten months old son was sleeping in a pram besides me while I had sent my husband to bring me an ice-cream. My husband laughed as he closed his laptop and got up because he too loved to eat ice-creams in winters, although they were hard to get. As I took out my drawing pad and pencils and looked at the majestic India Gate, I saw the cage appear in front of it, hanging in mid air.

It was white and big enough to accommodate at least five men. As people noticed it, then dropped whatever they were doing and started to walk towards it, as if in a trance. I too got up when my husband suddenly appeared and took my hand to stop me. I turned and saw two ice-creams in his hand. The traffic too stopped moving after a few seconds. While the murmurs were gaining momentum, the sky suddenly turned dark. It remained pitch black

for a few seconds and then all the colours of a rainbow were splashed all over it, moving like molted lava. Something very similar to the play of colors we see when we pour oil over water. And then that thunderous voice which appeared to be coming from everywhere and nowhere.

“I have placed 100 similar cages all over the world. These cages will be utilized to cleanse the Earth. I have given all of you enough chances but a few more years and I can kiss goodbye to any hopes of a better Earth. Over the next few months, the world will be in a huge turmoil but I am sure that those who will be left behind will be wise enough to find a path amongst the self inflicted human complexities. The ones, of whom the Earth would be cleansed are those who are devoid of even an iota of love and respect for the fellow Earthlings. Terrorists, rapists, molesters, poachers, murderers, drug dealers, corrupt leaders and corrupt Businessmen are the ones who would enter the cages first. All those who have even a small fraction of purity left in them and whom I consider worthy of creating a better future, will stay. All the cages will always remain on the Earth reminding you of what you all have become! As a parting shot, let me also inform you that I am removing all the weapons from the world. Goodbye.“

The skies cleared and for a second it seemed as if it was a bad dream but the cage was still there, hanging in mid air and emphasising the reality. There was such an eerie silence that it seemed as if the Earth had stopped rotating. They say that everyone on Earth heard that voice in the language they understood. I heard it in Hindi while the British tourist standing next to me heard it in English. That was the day when the world stopped and screamed afterwards.

Suddenly a man appeared from thin air inside the cage. He started screaming the moment he realised where he was. He was pleading and asking for help from the bewildered crowd staring at him. The cage started changing colours and turned to orange. Amidst shock and terror, we all realised what was happening. The cage was heating up. The man started jumping up and down to find a cool spot to stand but soon his skin started to stick to the hot base. He grabbed the bars to pull up his legs but his hands got glued to the hot bars. The cage was turning red and the man was melting sending an overpowering stench of burned flesh amidst painful screams for help. My son was wide awake by now and started crying. My husband took my hand and we moved towards our car to get out of there. We sat in the car for five hours before the traffic finally started moving. By that time, the cage at India Gate had taken 300 lives and the screams were ringing in my ears. 30000 people had vanished from the face of the Earth in those five hours. The cage was killing one person every minute.

On the third day from the beginning of the killings, my husband confided in me. He told me that as an eminent businessman of the city, he has given and accepted bribes numerous times. I sat there and listened to what he had to say. I knew all this already but I had accepted him the way he was because I knew that he was beyond repair.

“I am transferring everything to your name. I might be gone any second. Please bring up my son to be a good man. Not someone like me. I am sorry, sorry for everything.”, he said as tears welled up in his eyes. He cried bitterly that night. For the first time, I felt sorry for him and cried with him. All the property was transferred to my name within the next 15 days. Although I wondered about the worth of all that within a year.

By the end of a year 52,560,000 people were dead. Many of them were notorious criminals and eminent politicians. The world was in a chaos. The stock markets crashed, armies of all the countries were now unemployed and a few countries were left completely leaderless. Some people tried to destroy the cages, while some turned into believers. Despite the chaos, there was a serenity. A tacit calm. People were good to each other. They were hopeful that despite of what they had done in the past, Gods would spare them if they behave themselves now. Fear was driving people to love each other.

My husband vanished 14 months after the killings started. That day we were having breakfast and talking about our son’s birthday celebrations when he disappeared from his chair mid sentence. I stared at the unfinished toast and the half filled cup of tea for a long time as I didn’t had the courage to switch on the television and see him melt. Those fourteen months were the best time of our marriage. He had completely transformed and I had fallen in love with him.

It took the world 30 years to come back to order. Yes, we survived somehow. It became a beautiful place to live eventually. The generation who is running the world now is of my son’s age and they are brought up in an environment were “love” is the only word, the only possible solution. My son got married some years back and I am a grandma now. I had never believed in happily-ever-afters but I am living one now. Of course, I miss my husband at times. I still have that cup and plate in which he had his last breakfast.

And yes, the cage is still there at India Gate. Its a part of that monument now, a part of our existence. But I don’t remember if it has been used since a long time. I go to India Gate at times to have a look at it. To remember the day when the sky turned into a molten rainbow.