Reema tagged me for this very interesting meme. The moment I saw that I was tagged, I ended up in a cold sweat, simply because I could for-see the physical oscillations, jumping around and digging which I had to undergo to complete the tag. Mom has a very fascinating habit of putting away things and forgetting. But, more about it later. First I should give the description of what goes into the tag.

For this Tag, I was supposed to fish out an old photo, preferably a decade old and taken when I was completely unaware. I started working on this tag by asking mom if she remembers where all the “old” photos were. Thankfully I was able to locate them within five minutes of the excursion but sadly there was no “caught unaware” photo available in them. I now had to move much more backward in time and that is when the problem started. I again asked mom if she remember where the errrr “very old” photos were? She stared blankly at the wall for a few seconds and moved her head in a negative. Very original Mom!!!

It took me almost 4 hours to turn the whole house upside down to dig out those pics. I found them in the most unexpected of places where no one would have imagined their presence. Hmpfff!!! Typical!!! On an optimistic note, now atleast I know the map of the insides of my house. I had a clear feeling of Deja Vu, because a similar incidence happened when I moved here from Chennai some months back. I was surprised to see that many of my novels were missing. When I asked mom, she replied – “All your novels are on the shelf. There are no more.”

Unconvinced, because “Lolita” and “Lord of the flies” were definitely not sitting on the shelf, I turned the whole house upside down before I spotted two huge bags full of my novels tucked away inside a diwan by my mom and comfortably erased from her memory. Even after I stood in front of her with the two bags oscillating in my hands, she could not remember a thing!!! 😐

Ok. Enough of disparaging mommy dearest. The first photo I picked up was taken when I was freshly born. I was completely unaware because I was wondering where the hell I was and who were those strange people around me who were always smiling and throwing me up and down and making all those weird sounds while they ran their fingers on my stomach and embarrass me. So here is Amit with his Mom and Dad. 🙂 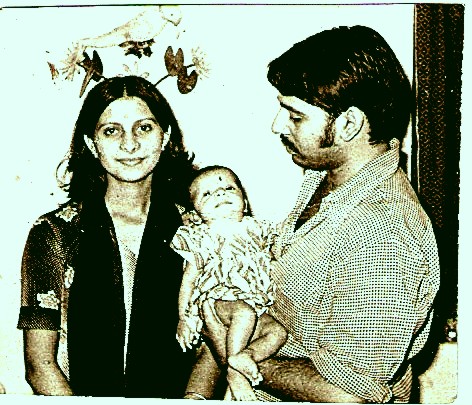 Another pic which I found, was taken when I was a little grown up and was dancing in a marriage. No one remember whose marriage it was but I like this photo because I look like a budding child artist who is waiting for the right kind of a break. Here it is.

And Oh yes!!! While looking at all the old photos, I came across a very old pic of my Grandparents. It was taken when they were just married. Since I have already told all of you about my Grandparent’s love story in A Bygone Life, I thought it would be great if I could post their pic too. Here it is.

So. thats all for this tag. Hope you all liked the pics. And I would like to tag Ish, Lallopallo, Nikhil, Sulz and Xylene.

32 comments on “The Know-your-house Tag”