This post is dedicated to all the sleepyheads who forgot to wish me on my birthday. Yeah Yeah, now don’t give that sleepy grin or the Oh-shit look. I must admit that this year the number of people who would be facing the wrath is very less and I am quite happy about it. 🙂 And as a once a year bonus, I was spared the task of decorating birthday cards with my calligraphy.

So, for all those who still are scratching their heads, 1 May was the historical day on which I was born. Its celebrated all over the world as May Day/Labour Day/International Worker’s Day. And yes I am quite used to being called a “labourer” at times. 😐 Once when I was quite acerbic and poured my heart to one of my friends about the disadvantages of being born on Labour Day, she patted my shoulder and replied – You should thank God that its not Labour Pain day. 😐

Talk about being optimistic. But Christ!!!!! Labour Pain day???

Ok, coming back to yesterday, my roommates brought a chocolate and walnut cake at 12 am and I had a cake cutting ceremony at my room which thankfully did not include “birthday bumps” and “Cake face pack” as I was constantly accepting birthday wishes on my mobile. I made sure that the cake was finished off before I put my mobile down so that I did not end up with the creamy face pack. This is that yummy cake.

In the morning, I had to wake up early as my mom had been constantly reminding me from the past ten days that I have to go to the temple in the morning and give food and money to the beggars. She is constantly consulting 3 astrologers to know what is going to happen to me in the future and one of them(Don’t know which one) provided her with this Temple thingy. So there I was, dragging my roommate Lokesh with me, at a local restaurant, asking for 10 “separate” packets of Idlies(Yeah, you read it right). I did everything according to my mom’s satisfaction, which I knew, would eventually give her a chance to tell my sister that I am such an obedient boy and she should be like me. Sweet na?? 🙂

We had planned for a Lunch in one of the four star hotel in Chennai, so I arranged for a cab to pick us up. Another cake was waiting there, to be castrated by me. 🙂

As we had our lunch, I was showered with cards and gifts and I was quite overwhelmed. The cards were beautiful and I could never have guessed the gifts. I was asked to make three guesses, but I blurted out anything just because I was so excited to tear off and see what’s inside. Thanks you guys for making my birthday truly memorable. Here is a sneak peek into the gifts.

*Drums rolling. Tension mounting up. The curtain goes up slowly* 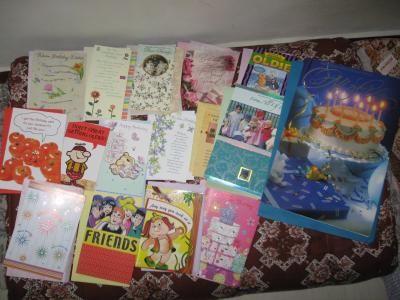 Ok, I got this really cool Philips Digital photo frame and “tashan” style goggles specially imported from America by my friends working there. The gifts were finalized after some grueling offshore-onsite discussions with my friends here. For those of you who don’t know, a digital photo frame comes with a memory card where you can upload photos and it will play them just like a slide show. It looks just like a normal photo frame in which photos keep on changing. How cool is that!!!! And the goggs looked just purrfect on me 😉 and it was something I was thinking of buying from a long time. 😀 A million thanks to the members of tararumpum gang.

Next on the agenda was a movie. We were all in a mood to laugh and make diggs at a movie and what better movie could have solved the purpose other than, you guessed it right, TASHAN. Also, one of my friend had not seen the movie and we all wanted to see the look on her face after the movie ended. We were quite surprised to see a house full and inside people were actually enjoying the movie once it started. We laughed our hearts out and clapped whenever any atrocity was bestowed upon us, which was quite often. The look on my friend’s face after the movie ended was priceless!!! We ended the day by having dinner at one of the restaurants where we have always been on every special occasion, whether it being someone’s birthday or an I-am-leaving-for-U.S.-party or Shit-I-lost-the-BET-party.

So there. Another birthday added to the string of memorable birthdays I am having from the past so many years. Now for those of you who have committed the crime of forgetting my birthday, can leave a message here or can call me. My blogging buddies can also wish me here. 😉

That’s it for the day, Ladies and Gentlemen.

37 comments on “How Amit celebrated his Birthday”